This is the first of a series of posts on computer-generated narration in elearning.

Back at the turn of the century when I was getting started with online training, there was a debate among designers about whether courseware should be seen and not heard. At the time, broadband was not widely available, so the burden of the extra soundtrack on transmission speeds was something to consider. For my client who was sending courses to affiliate stores in twenty states across a 9600 baud dial-up modem, the answer was easy: no audio. 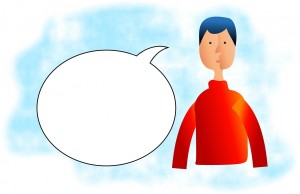 Today the bandwidth issues are largely gone, and the discussion is more likely to be when to use narration than if. Based on my experience, there are times for narration and times for silence.

Do use narration when:

Do not use narration when:

There are a lot of discussion points around narration, but for now let’s just say that there are times you should use it, and times you should not, depending on the content, the audience, and the purpose of the course. But that brings us to the next question: what type of narration? Do you need an expensive voice-over artist to be able to include good narration in your course?

In the last few years, a large number of text-to-speech (TTS) products have appeared that let the computer read a script aloud. These are not new – the Talking Moose™ appeared on the 1986 Macintosh™. But more recent versions do two things the Moose could never do: first, they can capture their narration in a file that can be inserted into an elearning module in products like Storyline™ or Lectora™, and second, they sound roughly like live human beings.

There are dozens of products that include TTS features, and in another post, I’ll review a few of the major ones. TTS is part of both the Mac and Windows operating systems, which would seem to eliminate the need for external applications. However, the built-in applications are limited in the voices you can use. External products such as those by Nuance™, Natural Reader™ and iSpeech™, have a wider range of more naturalistic voices (iPhone’s Siri for example, is in part powered by Nuance technology). Some of them allow you to tweak the output so that it sounds more natural. (By the way, I am not endorsing any of these products, just saying that they exist.)

At the end of the day, none of them are (yet) as good as a human voice. But TTS has a definite place in the online designer’s toolbox. Here are four good uses for low-cost computer voices:

I want to thank my Storyline user group, who got me to thinking about narration in elearning. Next time, I’ll talk a bit about how to get computer-generated narration for free.

Memorable Learning was founded after almost 30 years of telling the stories of people passionate about what they are doing. It began as writing laboratory reports to support a method of protecting a third-world farmer’s hard-won harvest from rats, but soon expanded. Whether it’s explaining a new software product to users, teaching engineers how to share data with international counterparts through an enterprise-wide system, or bringing accountants up to date on new developments in their fields, I’ve been privileged to work with some of the most passionate people in the world. View all posts by memorable-learning.com-admin